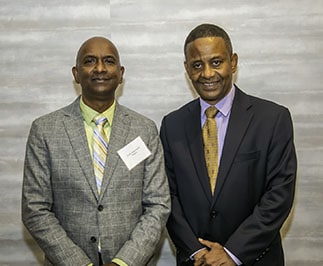 Michel Laguerre has been working for Vinfen since 1999. As a Residential Counselor, Michel believes he can relate to others from all walks of life. He is a dedicated and passionate employee who just wants the very best for people.

Michel was born into a large family of four sisters and three bothers in Port au Prince, Haiti. He was then raised by his godmother who did not have any children. By this, he grew up between two households that included his mother, father, and siblings, which ultimately complimented his family life. Michel then traveled to the United States in 1984 after he graduated high school to visit his relatives. “I ended up staying because of everlasting political and economic instabilities in my country,” Michel explained.

From a very young age, Michel was in tune with spirituality and altruism, especially seeking to foster happiness in other people’s lives. “I’ve always been a straightforward person and I do not cultivate hatred,” Michel voiced. With the natural ability to relate to humans, Michel sought out to find the best career that aligned with his abilities and passions.

When first coming to America, Michel wanted to learn English, and obtained some technical skills and certifications. “I was first certified as a truck driver and heavy equipment operator. Then, I studied electronics and computers and was a networking technician. I also enlisted into a psychology program, which I could not complete. I educated myself from different sources,” Michel shared. Michel’s brother-in-law worked in the neuro-behavioral health field, which sparked Michel’s interest in exploring how complex and powerful the brain is.

This is where Michel’s journey at Vinfen began. “I became interested in learning more on how fascinating life can be in connecting the dots among nature, humans, and technology,” Michel stated. Michel has been a Residential Counselor at Vinfen for two decades. Because Michel has a diverse background and the ability to speak Creole as well as English and Spanish, he feels he can relate and communicate to others in a way that not everyone is able to do. He came from a strong family life and belief system, with the ability to deeply understand the needs of others. “I believe that I’ve been a good asset to Vinfen, and am proud to help other staff bring an everlasting peace to the program where people we serve and staff have different cultures and languages,” Michel explained. Michel especially enjoys learning from others and continuing to anticipate and understand the needs of people.

Michel is excited to see what the future holds for him and his career, and hopes to take on more responsibilities and continue to excel. Recently, Michel was honored as a Staff Merit Awardee for his exceptional talents and commitment to helping the people Vinfen serves at Vinfen’s 12th Annual Celebration of Family Partnerships. Director of Service Asela Jayasinghe and his fellow teammates nominated Michel. “Michel has worked at Totten Pond for mare than a decade. When asked, he changes his schedule to help out, especially to support individual outings and family events. He also provided great support to one person when their only loved one passed away. He made sure he was always there to help this gentleman,” shared the team.

Michel is an example of a humble, intelligent, self-less, and hard-working individual who inspires cohesiveness and joy for all.